Award-winning entrepreneur Nidhi Shah, WG’17, G’17, has set out to fill human needs, whether toilets for urban India through her social enterprise or free lunch on Fridays for her entrepreneurial classmates.

Most successful businesses start by fulfilling a need. When Nidhi Shah, WG’17, began her business, she set out to fulfill one of the most universal needs — toilets. After all, everybody uses them.

The idea is behind RevoLOOtion is to sell, install, and maintain non-networked composting toilets in both urban and rural communities in India. As a for-profit social enterprise, Nidhi’s venture has racked up support and awards, including the Santander Venture Award and Jacobson Global Venture Award, support from Wharton’s Venture Initiation Program, pilot funding from Infosys Foundation, and most recently the Social Impact Award in the Penn Wharton Startup Challenge.

Nidhi has been fascinated with reducing waste since she was a middle-schooler pulling recyclables out of her family’s garbage.

“Composting is just a natural process,” she said. “Whatever organisms live in the air in the environment just go at it and break down the material. Literally, it’s just time and things that already exist in the waste. You can increase oxygen and aerobic decomposition by mixing the waste, and of course there are chemicals and organics you can add that enhance the process. But composting is essentially breaking down waste into a dirt-like substance.”

Nidhi recently graduated with a Wharton MBA and an MA in International Studies with a South Asia/Hindi concentration through the Lauder program. Prior to Wharton, Nidhi worked as a process engineer designing factories.

“Two years into working, I had this existential crisis. ‘What am I doing with my life?’” she said. In her work as a chemical engineer, she learned about Toilets for People, which was working with NGOs to provide composting toilets for rural areas in Latin American countries. Soon she started to work for the sanitation startup on the side.

She came to business school to gain skills to benefit Toilets for People, but around the time she was admitted to Wharton, she struck out on her own with the business plan that became RevoLOOtion.

“I knew that I wanted to focus on India,” she said. “The need there for affordable, ecological sanitation was pretty massive.”

Nidhi and RevoLOOtion are targeting informal urban settlements in India.

“Some may be illegally settled, but they’ve been there now for hundreds of years,” Nidhi said. “They have these haphazard sewage systems. When you have a flush toilet, you need an underground sewage network, but when you have a compost toilet, it’s just above ground. It fits into bathrooms that already exist but don’t have a solid waste receptacle yet.”

Why Wharton and Lauder

Nidhi chose Wharton and the Lauder program to gain better access to India, where she was born. She lived there for the first 11 years of her life, but she had never worked in the country and wanted to improve her Hindi skills.The two-month Lauder Summer Immersion in Delhi and Bombay got her to a flying start, allowing her to meet business people and cultural leaders while improving her Hindi language fluency.

“People always ask me why I’m taking Hindi. In the Indian business world, you can make do with English,” she said. “But sanitation affects the Hindi-speaking population of India disproportionately.”

Nidhi met her business partner, Swathi Sadagopan, through LinkedIn when Swathi was working on a business plan competition with a related sanitation idea. Nidhi advised her, and after Swathi won, they decided to join ventures, even though Swathi is based in Canada. While Swathi handles sales and marketing, Nidhi is in charge of the product side, which is still in development.

“We haven’t yet tested our toilets so far,” she said. “What we’ve been doing is working on new iterations, which we work with different people to design. We built one this summer and last summer. Eventually I’ll probably use some of my chemical engineering expertise to figure out the carbon-nitrogen ratios and things like that.”

At Wharton Nidhi’s favorite courses were Entrepreneurial Marketing and Entrepreneurship, and Innovation and Product Design with Prof. Karl Ulrich.

“I learned that when the market has a need, you serve that need instead of trying to create a need for your product,” she said — pull rather than push. RevoLOOtion’s original design was innovative, but when Nidhi talked to users, she realized that it was too complicated. “We changed our design based on understanding how this would be used finally. So there was a little bit of push, which we transitioned into pull.”

She took full advantage of Wharton and Penn resources for entrepreneurship, working on her business during the school year through the Venture Initiation Program (VIP) and over the summer using funding from the Lauder-sponsored Santander Venture Award and other sources.

As a constant resident of the VIP coworking space in Vance Hall, Nidhi noticed that Fridays in the suite were not as busy as she expected. She realized that it was difficult for some of her entrepreneurial classmates to avoid the siren call of recruiting, not just for the security of a job rather than a startup, but for a simple reason — free meals.

“You have so many employer information sessions where they serve you this really nice food, and there’s nothing like that for people who want to start their own company,” she said. She had the idea that the VIP program should serve catered lunch on Fridays, when MBA students don’t have classes and many spend time recruiting. She spoke to Valentina Goutorova, Senior Associate Director of Penn Wharton Entrepreneurship, and they worked to make it happen.

At first they had a tiny budget, but later gained structure as the VIP program grew. Nidhi planned the first couple meals, working with LocalStove, an Uber-like catering company for home cooks founded by three 2016 Wharton MBAs.

“I just wanted there to be more of an incentive for people to work on their company, and it turns out food is a good enough incentive. This place used to be empty on Fridays, and now it’s bustling,” she said. “It was a relatively easy way to build a community. Entrepreneurship can be kind of lonely, and we are building a support system that way.”

Now that Nidhi has graduated, she’s working full-time on RevoLOOtion, while her partner Swathi is still part-time.

“We’re trying not to both need to draw a salary from the company until it’s absolutely necessary,” she said. “Our first step is to just pilot these toilets — not necessarily have people pay for them yet but have them pay for the maintenance of the toilet to see if that whole ecosystem works.”

For Nidhi, the primary driver is having a positive social impact, with profit and growth to sustain the company.

“We think that this business could prove profitable. A third of the world not having a toilet is an economic opportunity. When you buy a toilet you pay money for it,” she said. “But my larger goal is thinking about what would make a meaningful impact. I’ve benefited from all of these systems, not just in India but in the U.S., and that means I should do something for those who haven’t had a chance to benefit.” 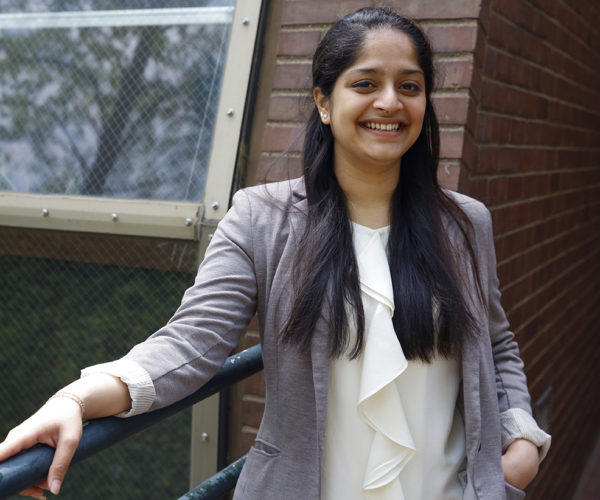 The Lighter Side of a Serious Issue

As driven as Nidhi is, she’s also extroverted, turning to standup comedy and performing in the Wharton Comedy Show as another outlet.

“The very first time I did a lot of jokes about poop. I stayed on brand!” she said. “The next time I took it a little further and talked about the experience of being a woman and menstruating. It seemed to resonate really well. Women were like, ‘Yes, this is our lives!’ Men were like, ‘What are you talking about?’ It created some conversation.”

Next she may take her comedy to India, along with her business, exhibiting her classic entrepreneurial risk-tolerance. “I sent a video to some people in India, and they told me I’d either bomb or go over extremely well. And that’s why I need to do it.”

Her comedy routine fits in with the whimsical name of her company.

“My personality is kind of fun, and I didn’t want this to be this serious thing, even though sanitation is a serious issue related to health and economics,” she said. “I strongly believe that you have to make it accessible to tackle the problem, and that’s part of what I’m trying to do with humor.”