A panelist at the 2018 Penn Health Policy Retreat, Health Care Management Prof. Ingrid Nembhard discussed her new research on how a new role for nurses may be one way to address care coordination failures in health care.

Issues related to care coordination remain a serious concern throughout the health care system and a new role for nurses may be one way to address the problem, Prof. Ingrid Nembhard told the audience at the 2018 Penn Health Policy Retreat. The audience included faculty researchers from political science, medicine, management, economics, ethics, nursing, and law — a mix reflecting the truly interdisciplinary nature of the discussion and the issues.

Co-sponsored by the Leonard Davis Institute of Health Economics (LDI) and the Perelman School of Medicine’s Department of Medical Ethics and Health Policy (MEHP), the retreat was held at Penn’s Perry World House. The day-long event featured panels of Penn’s top health services and policy researchers discussing some of the most pressing issues in health care.

Before she joining Wharton’s Health Care Management Department as the inaugural Fishman Family President’s Distinguished Associate Professor in January, Nembhard was an associate professor in both the School of Public Health and the School of Management at Yale. The focus of her research is on the work environment of health care professionals and organizational learning in health care.

Studying the Use of Nurses as Care Coordinators

Nembhard was one of four speakers on a panel discussing improving health care value through health care delivery. She focused specifically on care coordination and research she’s doing to explore the role of nurses as care coordinators.

She pointed out that the latest survey found 35 percent of patients saying they had experienced a care coordination failure in the previous two years and that the percentage is higher for high-needs patients.

She is studying the use of nurses as care coordinators on their respective clinical teams. To analyze the dynamics of nurses in this new role she conducted a field experiment in which each nurse, physician, and other personnel wore recording badges. The devices were designed to document care team member interactions including listening and interruptions.

Nembhard said the findings to date indicate potential problem areas. “We see that interruptions have increased between team members. We see that listening appears to be going down as recorded by the badges and we see there’s been no change in the equality of turn-taking,” she said.

“Past literature done in management work would say that better equality in turn-taking between nurses and physicians and other care team members would be associated with better team performance.”

— This story was adapted from an article by Hoag Levins that originally appeared in the LDI Health Economist. 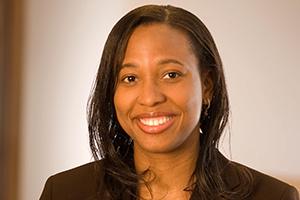 Research Interests
Prof. Nembhard’s research focuses on how characteristics of health care organizations, their leaders, and staff contribute to their ability to implement new practices, engage in continuous organizational learning, and ultimately improve quality of care.