Daymond John on Focus, Fashion, and Finding the Right Mentor

When he was 20 years old, Daymond John learned how to sew in his mother’s basement because he wanted to make clothes catered to the budding hip hop scene. His perseverance eventually led to the founding of international apparel company FUBU and a seat on ABC’s Shark Tank, where he would help numerous startups find their own success.

This January, John visited Wharton and Penn students at Wharton’s first-ever IDEATHON 2020, a 24-hour retail challenge hosted by the Jay H. Baker Retailing Center. He joined Wharton lecturer and Engineering Entrepreneurship Prof. Jeffrey Babin before a crowd of aspiring entrepreneurs to discuss growing through failure, mental health, and how focus — personal and professional — can be an invaluable tool.

When FUBU began to see adoption by other markets — by the Japanese market, by the grunge market — was there anything you did to take advantage of that?

John: I took their money, and then I took their input. I started off with 10 color shirts and five logos. Sixty to 65 percent of your sales are always going to be black; another 20 percent is going to be white. So what did I do? I cut out eight other colors.

The kids all wanted extra large and XXL at that time because people had been wearing baggy clothes. No guy wanted to wear a shirt that said “small” on it. So even though it was small, I’d cut the tag out and put “extra-large” on it. Whenever I was selling T-shirts, they wanted embroidery and not screen print. For sweatshirts, they wanted screens, but not embroidery. I just started getting narrow and deep on the product.

What key things do you look for in people you do business with?

When I look at entrepreneurs, I look for people who know all the things they don’t need to do. I look for people who know their numbers, are very, very clear, and have some level of sales and conversions. A sale doesn’t have to be a physical transaction. A sale can be that you have a video 10 million people watched, and that’s an actual contribution. And I need to know that I like the person. Do I like you? Will I be able to sit next to you for eight hours a day, five days a week, for the next five years of my life? 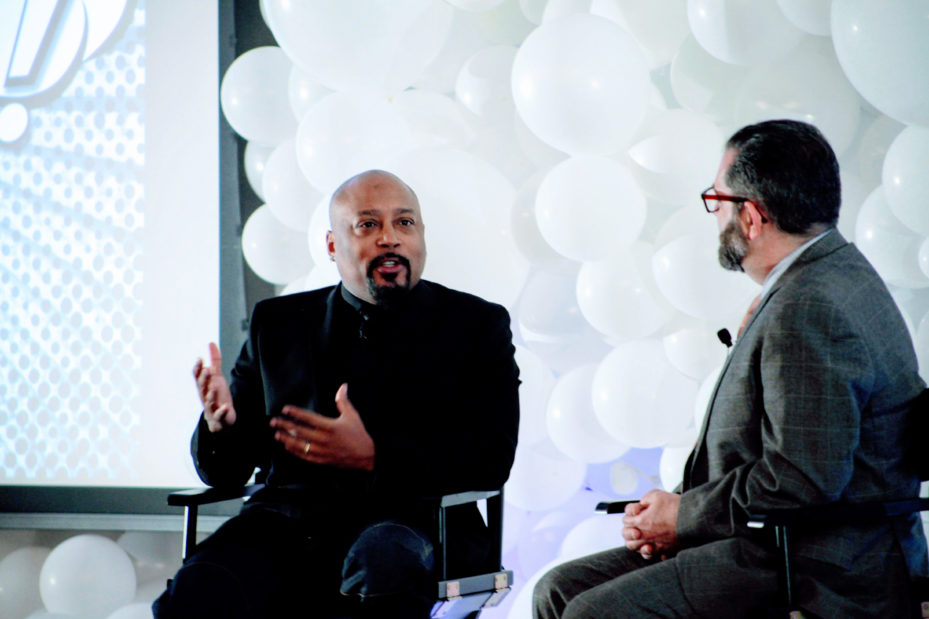 Why are you learning TikTok?

I’m learning about TikTok because those 15-year-old kids will be 25 in 10 more years, and I’ll be selling them something. I need to know how they operate. We’re at a time where you can reach every single person you want with the palm of your hands. There’s going to be 10 more TikToks between now and 10 years from now. But if you understand the fundamentals of how this community is speaking and communicating with each other, it’s easier if you’re going to move on to other platforms.

Not everybody watching Shark Tank is an entrepreneur. What do you want them to take away from what they’re seeing?

If you see someone like me, a dyslexic kid who got left back and never went to college, and see that I could make it, it means anybody in the world can make it. You just have to apply yourself.

Don’t let anybody tell you that entrepreneurship is glamorous. You work 80 hours so you don’t have to work 40 hours as an entrepreneur. Everybody thinks you walk on water. You have to listen to your staff and all your customers. You can’t tell anybody that if we don’t get another account, we’re out of business next month, because everybody will leave. So mental health is something that’s important.

What kept you motivated?

I had started several businesses prior to FUBU, and I failed the businesses because I was doing it for the wrong reason. I was doing it because I thought I’d get rich quick. But I loved it, and the business called me back. When I would sell somebody a shirt and I would see them later on they would go, “Man, you know what? I was looking for you forever and I can’t find the shirt anymore.” And that kept bringing me back, because I would have dressed people for free for the rest of my life if I could.

Can you speak to us about the benefits of having a college degree in business for going into entrepreneurship?

I think it’s critical to have a business degree, and to understand finance and how things operate. I think you’re also buying into a community of people who are like-minded, people who are driven, people who know how to complete tasks at a certain time and are dedicated. The fundamentals of business never change. I didn’t know the fundamentals when I started my business. And that’s why I failed all those times.

How do you find a phenomenal mentor and how do you sustain that relationship over decades?

First of all, find people that you want to be mentored by and find out what’s in it for them. My first mentor externally was a man who operated a corner store in my neighborhood. You would not necessarily think that this person was a business genius, but if you successfully have a small business in a neighborhood for 20 years and dealt with inflation, competition, disruption, technology, and everything else, you know the fundamentals just like the person running General Mills. You find mentors in various open areas. It could be spiritually, it could be health-wise, and for various other things.

What’s in it for the mentor though? I’ll give you an example. I love pets. I’m on the board of the Petco Foundation. Somebody came to me one day and said, “I want you to mentor me, but here’s what I’m going to do. I’m going to donate four hours of my time to a local shelter to help save animals. All I need from you is a one-hour call a month, just to ask you some questions.” Absolutely. No problem.

The Baker Retailing Center’s first-ever IDEATHON 2020 was an experiential hackathon-style event that took place January 24–25. Open to students of all programs and majors across Penn, participants had 24 hours to form teams, work together to ideate solutions to three brand challenges presented by Ralph Lauren, pitch to judges, and win cash prizes. Student teams joined forces with the industry’s leading startups, tech companies, entrepreneurs, and thought leaders who helped mentor them through their process.